German Shepherd is a breed of dog originally used as a shepherd and search dogs. German Shepherd was obtained as a result of selection and crossing some species of dogs from Central and Southern Germany. Distinguish between smooth and rough varieties. Nowadays German Shepherd engaged exhibition career, security, as well as dogs are for the family. 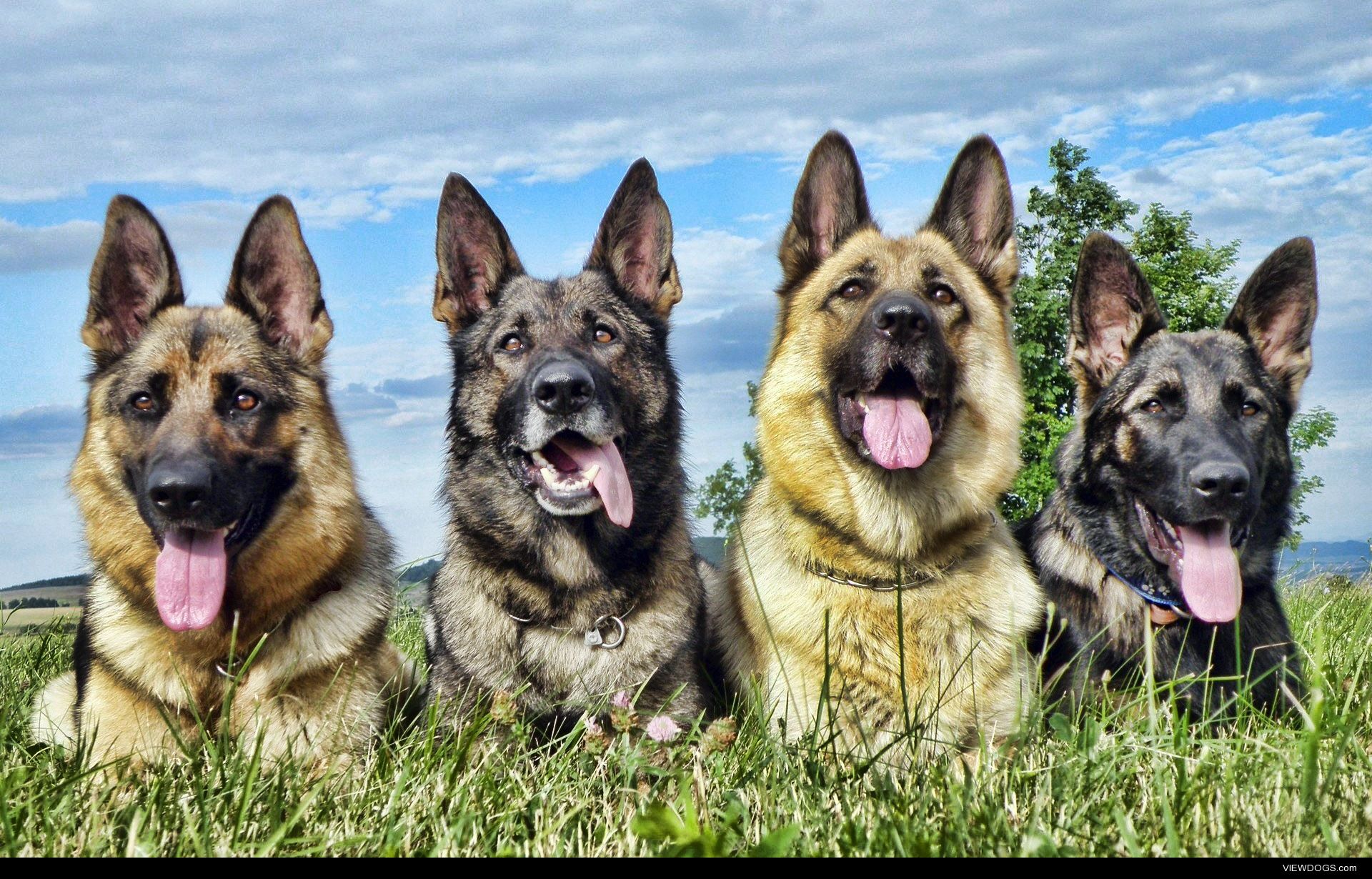 It was determined two main centers of origin, namely the present territory of Scandinavia and Northwest Russia, but there has not been without blood Indian wolf. The first representative of the German Shepherd breed as – off-white color Greif – was shown at an exhibition in Hanover in 1882. Greif was first included in the genealogy book of German Shepherds.German Shepherd was bred in the late XIX century. His official birth of the breed owes to the efforts of the founders of the German Shepherd Dog Club of fans (German Verein fur Deutsche Schäferhunde, or SV), which was headed by Captain Max von Stephanitz (German Max von Stephanitz), rightly considered the spiritual father of this dog breed.

Von Stephanitz mindedness allowed him without any bias to evaluate various types of German Shepherds in the hope of creating a type of average. The basis of future rock lay a single principle: “The German Shepherd Dog is any herding dog, living in Germany, which, thanks to the continuous training of its qualities shepherd dog, reaches physical and mental perfection in its utilitarian function”.The breed, organized and delivered to the national scale, quickly progressed through the combined efforts of breeders of German shepherd dogs. In 1899, the German Shepherd was first officially shown in a wide Germany dog show.

German Shepherd breed standard was first drawn Stephanitz and Mayer in 1899. The original text has been added in the 6th Assembly members SV, descendant July 28, 1901, at the 23rd Assembly held September 17, 1909 in Cologne, at a meeting of the Board of Directors and Advisory Committee in Wiesbaden September 5, 1930 and at a meeting of the Commission on breeding and the Board of Directors March 25, 1961. Then the text was revised by the World federation of societies lovers German Shepherd (WUSV) and adopted by the WUSV meeting August 30, 1976. Once again, the standard has been rewritten and restructured 23-24 March 1991.At the end of December 2010 the standard was changed again. Now, long-haired (with undercoat) Shepherd officially recognized the breed.

The original purpose of the German Shepherd – protection of the herd. Reducing the number of livestock and widespread breed breeders forced to look for new ways to use the dog, the benefit of its physical and mental qualities, physical stamina, endurance, in bad weather, well-developed flair promised much. German Shepherd brilliant successes in a variety of activities were not slow to draw attention to themselves. In 1901, the police in conjunction with the German club lovers German Shepherd organized special tests, and two years later compiled and published rules of training and the use of police dogs.

In 1914, the club organized a demonstration of the SV German Shepherd in the army. In 1925, in Frankfurt am Main, the first exhibition championship.The First World War put forward a German shepherd in the literal and figurative sense to the forefront. Essential military assistant, she became prevalent in nurseries as the German army and its allies in the military and in the armies of the Entente.Second World War caused dog breeding, as well as all other areas of life, extensive damage, but some breeders still managed to keep a small number of breeding dogs. In 1946, Germany was divided into two parts. Naturally, from that time began to emerge in the GDR their lines of dogs.

The main trend of the last two decades is the expansion of breeding dogs, mainly thanks to the cooperation with experienced dog owners from all five continents, strictly complying with the recommendations of the German specialists. The result was a competition not only in the championship SV, but also on the European and World championships dogs, from year to year confirming that worldwide, a large number of breeders and fans of German shepherds, are able to compete with their counterparts from Germany.

This is a service dog with a balanced, movable type of behavior capable of diverse training. The German Shepherd Dog is the most successful, if there is one master, but her forte (as a service dog) is that it is very easy to change the owner and is interested in working with the new. For example, a Rottweiler or Giant Schnauzer owners do not take the change, refuse to obey the new yearn for the old, but “the Germans” are not affected. During the patrol service dogs often have several companions daily. But the companion change is not a problem for the German Shepherd.

She is able to execute commands without hesitation from any police officer, who now goes to the patrol.Many owners of German Shepherds are very sensitive about what their pets on the site dog like to play with other dogs owners, retrieve and perform without problems even willing to leave its owner and leave the site with anyone who would regularly throw them sticks or balls.

The German Shepherd is one of three in the ranking of the most intelligent breeds, compiled by Dr. Stanley Coren (Eng.), Professor of Psychology at the University of British Columbia in Vancouver (Canada).

Many dog ​​experts believe German Shepherd dog ideal; this is partly true, but law enforcement officers and border guards who had to deal with this breed whole life do not always agree with this opinion. In other turn, many of them believe that “German” dogs have high intelligence what creates problems in its use as a watchdog, as well as search dogs.  The fact that some (apparently the most intelligent) German Shepherds sometimes tend to skip through the filter owner’s orders by its own assessment of the situation. There are some “Germans” dogs, which before the attack command to the person will pretend to, whether to do it, is there really a need for this, whether it is dangerous. In this case a dog instantly checks target for the  adrenaline (afraid of dogs or not), weigh its size, assesses the degree of aggressiveness and even take into account the fact is there a weapon or not.

Known facts when German Shepherds in situations when their owners come to grips with other people, at best, ran up, sniffed the participants of fight and making sure that the owner is on top, just stepped aside. And in the worst case – lying nearby, quietly gnawed sticks sandwiched between the paws. And finally, in many references in the description of the nature of such a celebrated German Shepherd is a serious flaw, as cowardice. Unfortunately, this issue actually takes place in individual instances breed. We should not, of course, suspect cowardice in all “Germans” – we must remember that we are talking about individual representatives of the breed. Must take into account the fact that the breed is very common all over the planet – perhaps it is the most common – so the more dogs of this breed there at all, the more, of course, comes among them, and those who have certain defects.

One thought on “German Shepherd”